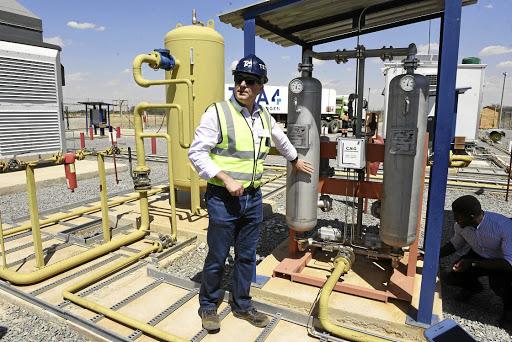 Renergen is making it its business to talk up small-cap stocks. And its own prospects, hype aside, look promising

When the Renergen executives first went out to inspect the natural gas asset they had bought in the Free State, they had no idea of the stomach-churning event that would follow.

There were four wells in the ground which had been left open to emit natural gas, the principal component of which is methane, which attracts flies.

Renergen CEO Stefano Marani takes up the tale: “Rob, our operations manager, comes out with this 2m spike, and he starts hacking inside the well. All of a sudden, fly blood just comes flowing out of the well and drenched us all … I honestly almost vomited.”

This is just one of many memorable stories about Renergen’s Virginia gas project which, as one observer in a recent webinar noted, “reads like a Hollywood script”.

Renergen acquired the project, also known as Tetra4, for $1 in 2015 from an Australian company called Molopo Energy, which was in financial distress amid crashing gas prices.

The operation was and remains the only project with a valid onshore oil and gas production licence in SA. Renergen’s intention was to build a small gas-to-power plant for a nearby gold mine. But then they discovered that the gas contained helium.

In fact, with a concentration of 3% helium, the resource is so rich that it prompted a number of experts to put the phone down on Marani in disbelief when he first started calling around with the lab results. A concentration of just 0.1% helium is considered commercially viable, while 0.3% is considered world-class.

The industrial gas is a finite resource for which there is no replacement. It’s critical to the medical and defence industries, among others, and the world is running out of it. The US has declared it a strategic resource.

“Each rocket launch uses the same amount of helium as 2-million party balloons and China wants to launch something like 120 rockets in the next 18 months,” Marani says.

The 3% concentration relates to the proven portion of the gas field and the first phase of the project.

But another, unproven portion that relates to phase two and three of the project could be even more exciting. Not only could the helium concentration in that part of the field be richer — as high as 12% — but it could also be incredibly large. A report commissioned by Renergen from global energy consulting firm Sproule says that in a best-case scenario the reserve could be 344-billion cubic feet, more than the proven reserves in all of North America. (Though more drilling must be conducted to determine the “economic recoverability” of the resource).

But while Renergen’s big story captures the imagination, it’s so good — too good — that it has struggled to win over sceptical investors.

One unnamed small-cap analyst says he deliberately avoided covering the stock over the years despite numerous requests.

“It was too much of a rah-rah story. That’s why all the institutional investors stayed away.”

It’s a major frustration for Renergen, which recognises that the lack of analyst coverage for small caps is a problem for investors wanting independent views.

It’s also a key reason why Renergen last year listed on the ASX in Australia, where small-to mid-cap resources companies are more commonplace and likely to be covered.

As it stands, Renergen’s majority shareholder with 29.4% is the Otto family, which originally backed Marani to buy the Virginia asset.

With 22.3%, Mazi Capital is the second-largest shareholder, while Renergen’s management portfolio holds 14.7%. The balance is made up of smaller private shareholders and financial institutions as a result of the dual listings.

But even without buy-in from the wider investing community, the ball has started rolling.

Last year, Renergen secured $40m in funding from US development financier, the Overseas Private Investment Corp, to develop phase one. This is a small liquefied natural gas (LNG) plant producing 50t a day and a helium pilot project producing 350kg a day.

The LNG will be used to fuel converted trucks. Renergen has joined with Total to establish LNG filling stations on key routes, starting with the N3 between Joburg and Durban.

Estimates from research and advisory company Edison group is for Renergen revenues to jump from R8.5m in 2021 to R300m in 2022, which is expected to be the company’s first full year of phase 1 production.

In phase 2, which relates to the unproven portion of the gas field, Renergen hopes to produce 10,000kg of helium a day. This will make it one of the largest helium projects in the world, accounting for as much as 5% of global supply. “This is our hope,” says Marani. “Not to say it’s going to happen. We need to wait for the results from our reservoir engineers.”

Despite this, and some favourable developments, at R14.83 a share the Renergen stock is yet to climb to its 2015 listing level of R17.

Keith McLachlan, fund manager at Alpha Asset Management, says that “while the LNG is nice, the real upside lies in the helium”. Though the resource is nontraditional the fundamentals appear quite attractive given strong and sustained flow rates, great concentrations and a large, long-life resource, he says.

“A key risk to the downside is that though phase 1 is funded and will take them into production, phase 2 and phase 3 are not. The risk of future dilution needs to be weighed against the positive fundamentals,” he says.

The share, he adds, is not liquid and that comes with its own risks.

Asked about a spate of media releases from the company recently, Marani says it’s to raise awareness for small caps that are critically important in developing the SA economy.

It’s not aimed at attracting funding for phase 2, which Marani is confident will be forthcoming.

Though the company is still viewed as an exploration entity, Marani says this is unfair considering it is going into production and expects to be generating revenue from phase 1 before the end of next year.

Still, McLachlan says, there are risks.

“I do believe that the gas is there and the odds are that it holds valuable concentrations and is a relatively long-life asset. Irrespective, anything can happen and the risk is real.”

If the Renergen story indeed has the makings of a film script, all it needs now is a Hollywood ending.